Power Differential in Counseling, Direct and Indirect Technique in Bodywork

In Counseling the Therapist is assumed to be the one with greater power, since the recipient is the one in need and the therapist has what they need. Still, some counselors attempt to reduce the power difference and operate as equals. There are pros and cons and debate as to which approach is more effective.

In bodywork there are two overall approaches called Direct and Indirect Technique. There are pros and cons and debate as to which approach is more effective.

I see similarities between the two debates and propose both have similar dynamics.

First here is a quote outlining the situation in counseling:

From the outset of the first encounter, the client clearly is in need of some assistance and the counselor is identified as an expert with specialized talent and skills to provide the desired help. . . . Although counselors do make an effort to demonstrate complete sincerity and respect to the client, nonetheless an uneven distribution of status and power remains. After all, the relationship takes place on the counselor’s home turf. There are diplomas and books on the wall. A warm professional atmosphere pervades, yet the counselor gets the more comfortable chair and, when both speak simultaneously, the counselor usually prevails.

In traditional approaches to counseling developed by Freud and his followers, this power imbalance was conceived as critical to the success of the treatment. Their argument was that when clients perceive the counselor as a person of authority and expertise—in effect, idealizing the counselor as a person of great wisdom who possesses the key to their feeling better—they are more likely to experience hope that the process will help them. This hope and expectation of a positive outcome strengthens their commitment to the counseling process (Jacobs, 2004). For some clients, it even provides immediate relief from some of their emotional distress. You probably have experienced this phenomenon yourself, when you see a medical doctor who gives you a diagnosis and a prescription; if the physician conveys knowledge and confidence, you are likely to feel better even before the medicine’s effects kick in.

Many practitioners, such as Rogers (1957) and Boy and Pine (1999); relational theorists, such as Jean Baker Miller and Judith Jordan (Robb, 2006); and more recently, Scott Miller and colleagues (Duncan, Miller, & Sparks, 2004), try to minimize the power dimensions of the relationship, believing that equality is crucial to change. Feminist approaches to counseling (Burstow, 1992; Cook, 1993; Zimmerman, 2002), as well as narrative ones (Monk, Winslade, Crocket, & Epston, 1997; White & Epston, 1990), conceive of relationships that are especially sensitive to those who have been oppressed by the dominant culture. This is in marked contrast to other practitioners (Erikson, 1950; Haley, 1984, 1989; Minuchin, 1974; Strong & Claiborn, 1982), who made a strong case that the counselor should deliberately and strategically cultivate a powerful position in order to be more influential.

My understanding of Direct and Indirect Technique was taught orally through workshops I attended in Osteopathic Technique, but is also published in Jean Pierre Barral’s introduction to the 2006 book, Visceral Manipulation. I feel it would be better for me to paraphrase than to quote extensively from his book.

Let’s say a person comes in with muscle tension in the neck. The muscles on the right side of the neck are too short, too contracted, too tense, and it is literally pulling his head to the right. What are the therapist’s options?

One Direct Technique would be muscle stretching. Get him on the table, have him sit on his right hand and pull his head to the left until the muscles on the right are fully stretched. When you let his head back it should be closer to straight. Done.

One Indirect Technique would be to gently cradle his head and allow the head to go as far to the right as it wants to go. The therapist’s hands would not be directing which way the head should go, but only supporting and assisting the head and muscles to do what they intend to do. It sounds counterproductive. But over a few minutes something happens from within the person. Perhaps the brain thinks, okay why am I doing this? Do I need to keep doing this? Whatever the brain is thinking, at some point the therapist feels the head wants to begin moving back toward neutral. It may not move all the way back to neutral. It may want to test the waters, pull to the right some more, test again and again and maybe an hour later the head will be back to neutral. 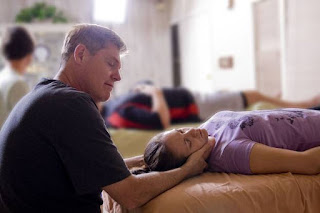 And if we are wondering, Which Is More Effective, perhaps the answers are similar?

My expectation is that if you judge results early, Direct Technique and Authoritative Relationship show more results.

My expectation is that if you look at the person’s symptoms over time, Indirect Technique and Equal Relationship catch up in effectiveness.

What are your thoughts? Please comment and I will be happy to respond.